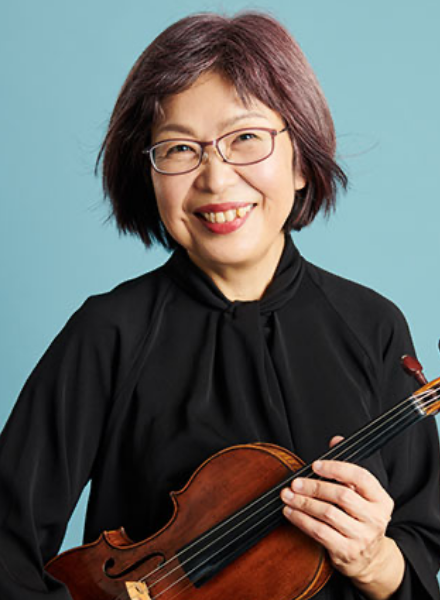 Kyoko Shikata was selected for the 47th NHK Mainichi Music Competition, while she was a student at Tokyo University of the Arts. She studied at the Hochschule für Musik Freiburg, Germany under Wolfgang Marschner as well as being an assistant to him. In 1982, she won the first prize at Ludwig Spohr International Violin Competition. From 1990 to 2003, she was the first concertmistress of the WDR Sinfonieorchester Köln with which she has made many recordings including Bartók Violin Concertos No. 1 and No. 2. Her concert of Ysaÿe’s complete solo sonatas for violin in Cologne was recorded live and highly appreciated. She was the Music Director of the Affinis Summer Music Festival from 2002 to 2018. She is currently a professor at Kyoto City University of Arts. She has been the concertmistress of the Hyogo Performing Arts Center Orchestra since 2005, the solo concertmistress of the Tokyo Metropolitan Symphony Orchestra since 2009. She received the Hyogo Prefecture Culture Award in 2009. 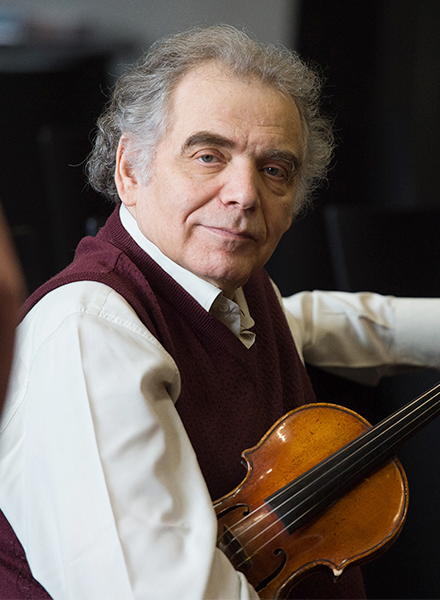 Born in Uralsk in 1947, Zakhar Bron studied at the Stoliarski School for Music in Odessa, then at the Gnesin Conservatory uner Boris Goldstein from 1960 to 1966, and at the Moscow Conservatory under Igor Oistrakh from 1966 to 1971. He worked as an assistant to Professor Oistrakh at the Moscow Conservatory from 1971 to 1974, and then moved to the Novosibirsk Conservatory, where he developed his own teaching methods and trained many outstanding violinists. During this period, he won the prize at the Queen Elisabeth International Music Competition in 1971 and the Wieniawski International Violin Competition in 1977, he expanded his activities as a performer. In 1989, he became a professor at the Conservatory of Music in Lübeck, and has since served as a professor at the University of Music and Performing Arts in Cologne, the Zurich University of Music, and the Queen Sofia University of Music in Madrid. He has been invited as a jury member to many international competitions such as the Tchaikovsky, Geneva, Kreisler and Tibor Varga competitions. He is currently the director of his own academy and chamber orchestra in Interlaken, Switzerland. His students include many top artists and prizewinners of major international competitions, such as Vadim Repin, Maxim Vengerov, Daishin Kashimoto, Sayaka Shoji, Tamaki Kawakubo, and Mayuko Kamio. In Japan, he had the “Yokohama Zkahar Bron Violin Seminar” at the Yokohama Minato Mirai Hall from 1999 to 2002 and the “Miyazaki Zakhar Bron Music Festival” from 2005 to 2019. He gave lessons at the Ibaraki International Music Academy in Kasama from 2005 to 2019. He is a Merited Artist of the Russian Federation.

Born in Brazil in 1977. After studying conducting with John Neschling in Brazil, she completed the Diploma Superior in orchestral conducting in only one year (which normally takes three years), at the Ecole Normale Supérieure de Musique in Paris. At the same time, she studied in London with Colin Metters at the Royal Academy of Music, and has been active in conducting contemporary music as the resident conductor of the Remix Ensemble (Portugal) and Ensemble Multilaterale (Paris). Until 2012, she was the permanent conductor of the Symphony Orchestra of the University of São Paulo State Campinas (one of the best universities in Latin America with a Faculty of Arts), and released two albums of contemporary Brazilian music, which received high praise from the Association of Music Critics of São Paulo as the best Brazilian music project of 2011. In 2013 and 2014, she was invited by Paavo Järvi and Neeme Järvi to participate in the Pärnu Festival and the Järvi Academy (both in Estonia), and in 2013 she was invited to audition for the position of Assistant Conductor of the Orchestre de Paris. She is currently an assistant to Paavo Järvi in several projects with the Deutsche Kammerphilharmonie, the Frankfurt Radio Symphony Orchestra, the Vienna Symphony Orchestra and the Staatskapelle Berlin. 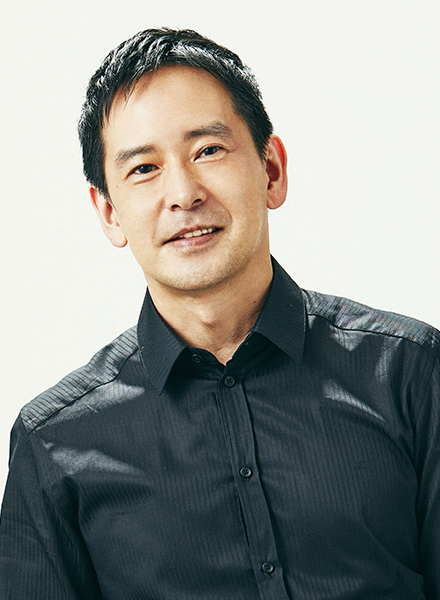 Born in Nicaragua, Susumu Aoyagi started playing the piano at the age of five in the United States. After returning to Japan, he won the first prize at the All Japan Student Music Competition. He received the West Japan Music Award while studying at Toho Gakuen School of Music, and later studied at the Berlin University of the Arts. In 1992, he won the prize at the Marguerite Long=Thibaud International Competition. Since then, he has performed at the Embassy of Japan in Paris, Radio France, various places in Germany and the United States. He won the first prizes at the numerous international competitions including Jaen (Spain), Alfredo Casella (Italy), and Pollino (Italy). In 1997, he started giving concerts in Japan, and was awarded the Aoyama Music Prize in 2000, and the Japan Chopin Society Prize in 2001. He has released seven solo albums, all of which have received high acclaim. In 2006, he started his own recital series, “Liszt’s Room,” focusing on Liszt’s works, which was held for the 15th time in 2020. He has performed with many orchestras in Japan and abroad. In recent years, he has been active in chamber music concerts. In March 2012, he gave his debut performance at the Carnegie Hall Weill Recital Hall, which was highly praised by the local media. He has been a jury for several competitions, including the Music Competition of Japan, the Tokyo Music Competition, and the Jaen International Competition. He has been a jury of the Takamatsu International Piano Competition since its first edition, and is currently involved in the production of the competition as deputy jury president. He has been a professor at Tokyo University of the Arts, a visiting professor at Senzoku Gakuen College of Music, a visiting professor at Sapporo Otani University, and the music director of the Nagasaki Ojika International Music Festival. 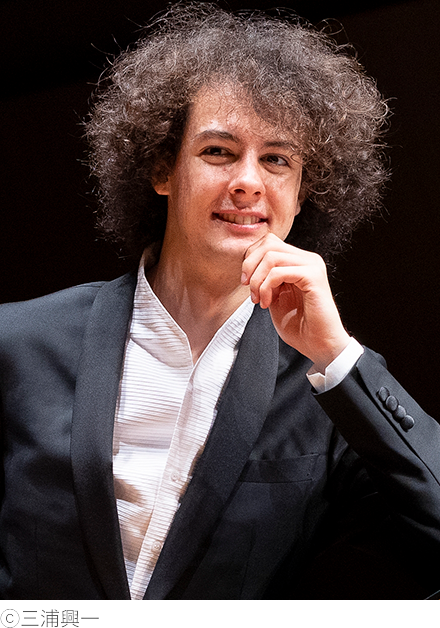 Turkish pianist Can Çakmur is the first prize winner of the 10th Hamamatsu International Piano Competition in 2018 (where he also won the Chamber Music Prize) and the Scottish International Piano Competition in 2017. Can has performed in a variety of concert halls worldwide; including Wigmore Hall in London, Glasgow Concert Hall, Eindhoven Muziekgebouw, Tokyo Opera City, Muza Kawasaki Hall as well as the most prestigious concert venues in his homeland, Turkey. He has appeared in the most important classical music festivals in the country including the Istanbul Music Festival, where he headlined the opening concert in 2015 with Borusan Istanbul Philharmonic Orchestra under Sascha Goetzel. 2019/20 season saw him successfully debut with numerous European, Japanese and Turkish orchestras including the Royal Scottish National Orchestra,Telavi International Music Festival Orchestra, Sapporo Symphony Orchestra, Tokyo Symphony Orchestra, Tokyo Philharmonic Orchestra, Osaka Symphony Orchestra, Çukurova State Symphony Orchestra as well as the Presidential Symphony Orchestra and in halls such as Paris Salle Cortot and Wigmore Hall. Recent and forthcoming season highlights include Louis Vuitton Foundation in Paris, Carnival of the Animals with MDR Sinfonieorchester, Mozart and Addinsell Concertos with Camerata Schweiz at KKL Luzern. Can’s latest SACD released in last October with BIS Records, featuring Franz Liszt’s arrangement of Schubert’s Schwanengesang has received glowing reviews from international critics. With this groundbreaking album Can won the Young Artist of the Year at the International Classical Music Awards in January. Can was born in Ankara, Turkey in 1997. Currently, he is continuing his music studies under the guidance of Prof. Grigory Gruzman of the Weimar University of Music. 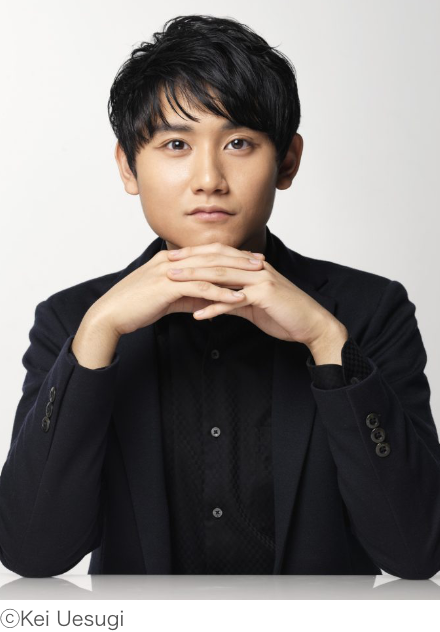 Born in 1995 in Kamaishi City, Iwate Prefecture. After graduating from Morioka First High School, he studied in Toho Gakuen School of Music as a special scholarship student and graduated with the highest honors. He won the first prize in numerous competitions including the 21st Hamamatsu International Piano Academy Competition in 2017, the 2nd Coimbra World Piano Meeting (Portugal) in 2017, the 87th Music Competition of Japan in 2018, the 15th Hastings International Piano Concerto Competition (UK) in 2019. He has performed with the Royal Philharmonic Orchestra, the Tokyo Philharmonic Orchestra, the Yomiuri Nippon Symphony Orchestra, the Tokyo City Philharmonic Orchestra, and others. In 2016, 2017, he was selected as an Aoyama Music Foundation scholar. He was awarded the 37th Kirishima International Music Festival Prize. In 2019, he was selected as a ROHM Music Foundation scholar as well as a CHANEL Pygmalion Days 2019 artist. He currently studies at the Toho Gakuen School of Music Soloist Diploma Course and at the International Piano Academy in Imola. He studied under Boris Petrushansky and Mamiko Suda. 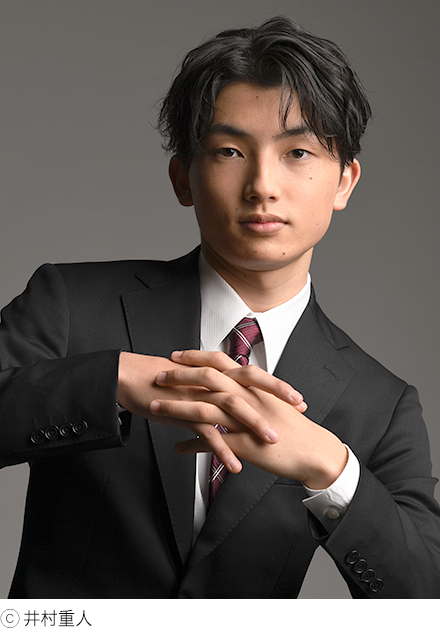 Akito Tani was born in 2003.
He is the recipient of many awards. He won the Special Prize in the 20th Hamamatsu International Piano Academy Competition, and the Kirishima International Music Festival Award and Tsutsumi Tsuyoshi Musical Director Prize in the 38th Kirishima International Music Festival. He was also awarded First Prize in the online International Tchaikovsky Competition for Young Musicians, as well as the 6th Arion-Toho Music Award. Tani received the Superior Grade Bronze Prize at the 44th PTNA Piano Competition. He earned the Second Prize (the highest prize awarded) and Audience Prize in the piano division of the 18th Tokyo Music Competition, and the First Prize and Audience Prize in the 90th Music Competition of Japan.
Akito Tani has performed with numerous orchestras including the Tokyo Symphony Orchestra, Tokyo Philharmonic Orchestra, Hiroshima Symphony Orchestra, New Japan Philharmonic Orchestra, and Tokyo City Philharmonic Orchestra; and with conductors such as Kazuyoshi Akiyama, Yukari Saito, Ken Takaseki, Kosuke Tsunoda, and Kazufumi Yamashita.
Tani is currently studying with Michiko Okamoto, Naohiro Suzuki, and Eiko Nagano. He has been a Rohm Music Foundation scholarship student for 2021 and 2022.
Having graduated at the top of his class from the Music Department of Toho Gakuen Music High School, Tani is currently a scholarship student in the Soloist Diploma Course of Toho Gakuen College Music Department.